Added 2 weeks ago by
22 Views
1: While world is watching pictures of Chinese 3rd aircraft carrier being built in a shipyard.
2: China is secretly improving its submarine design which it will export to Pakistan also.
3: Type-039A Submarine also Known as Yuan-Class is a modern form of old Type 039 (Song-Class)
4: Now there are TikTok Videos and pictures that suggests that china has completely Re-Designed this Yuan Class Submarine
5: This New Type-039C has the revised sail design. And experts are comparing it with Sweden’s A26 Submarine. Which is upgrade of current Sweden’s Gotland-class submarine
6: On the Swedish boat, this feature is understood to have been chosen to increase its stealth characteristics.
7: seen a brief video posted on the TikTok social media platform showing the Type 039C being moved up a river by tugboats from the shipyard where it was built in Wuhan.
8: submarine, first reported on the new subclass on May 12 and considers it “likely to be significant […] major upgrade to an already competitive design.”
9: revised sail design is likely related to a sonar or communications system and also points out a housing on the upper part of the rudder that appears to house a towed array sonar
10: Other changes seem to be a generally ‘cleaned up’ hull, which should ensure that the Type 039C moved more quietly below the waves than its predecessors.
11: only the first example completed, we can expect other improvements over the already impressive Type 039A/B class, around 17 of which are in Chinese service, while modified versions are also being built for export to Pakistan and Thailand.
12: thought to be among the quietest submarines in active PLAN service, the Type 039A/B boats are thought to use air-independent propulsion (AIP)
13: likely use a similar Stirling-type engine as used in the influential Swedish Gotland class design and the future Blekinge class
14: The Stirling auxiliary engine, or Chinese equivalent, burns liquid oxygen and diesel to drive electrical generators that can be used for either propulsion or charging the batteries
15: Type 039C may, introduce a more exotic propulsion system, lithium batteries as used in Japan’s latest Soryu class submarines.
16: These batteries offer a range of advantages, including increased endurance at high speeds when submerged, quicker charging and longer battery life, and reduced maintenance requirements, entirely replacing the AIP engine.
17: China is Building Conventional Submarines, as compare to All Nuclear American ones.
18: They are cheap to build, cost less and are quieter in water.
19: Size-wise, the new Type 039C is likely similar to the Type 039A/B, which measure around 250 feet long and have a displacement of approximately 3,600 tons.
20: 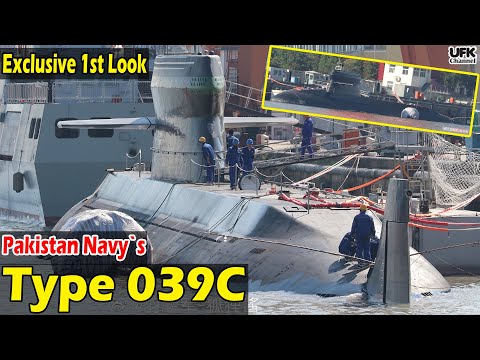 1: While world is watching pictures of Chinese 3rd aircraft carrier being built in a shipyard. 2: China is secretly improving its submarine design whi...