Added 1 month ago by
11 Views
Flight Navigator Handbook 2011 FAA-H-8083-18, Chapter 1 Maps and Charts
Search Amazon.com for the physical book. Flight Navigator Handbook 2011 FAA-H-8083-18 https://amzn.to/3qJWpH8 (paid link)
As an Amazon Associate I earn from qualifying purchases. Thanks in advance.
The pdf version is available here. https://www.faa.gov/regulations_policies/handbooks_manuals/aviation/media/FAA-H-8083-18.pdf
Chapter 1 Maps and Charts Introduction Aviators use air navigation to determine where they are going and how to get there.
This book serves as a reference for techniques and methods used in air navigation.
In addition to this book, several other sources provide excellent references to methods and techniques of navigation: • The Journal of the Institute of Navigation—published quarterly by The Institute of Navigation, 1800 Diagonal Road, Alexandria, Virginia, 22314, and covers the latest in navigation technology.
• The United States Observatory and United States Navy Oceanographic Office—publications include the Air Almanac, Nautical Almanac, NV Publication 9 (Volumes 1 and 2).
• The American Practical Navigator, SR Publication 249, Volumes 1 through 3, Sight Reduction Tables for Air Navigation and Catalog, and the NGA Public Sale Aeronautical Charts and Products—published by the National Geo-Spatial Intelligence Agency (NGA) (formally known as the National Imagery and Mapping Agency (NIMA)).
• Dutton’s Navigation and Piloting—published by the Naval Institute Press, Annapolis, Maryland.Basic Terms Basic to the study of navigation is an understanding of certain terms that could be called the dimensions of navigation.
The navigator uses these dimensions of position, direction, distance, altitude, and time as basic references.
A clear understanding of these dimensions as they relate to navigation is necessary to provide the navigator with a means of expressing and accomplishing the practical aspects of air navigation.
These terms are defined as follows: • Position—a point defined by stated or implied coordinates.
Though frequently qualified by such adjectives as estimated, dead reckoning (DR), no wind, and so forth, the word position always refers to some place that can be identified.
It is obvious that a navigator must know the aircraft’s current position before being able to direct the aircraft to another position or in another direction.
• Direction—the position of one point in space relative to another without reference to the distance between them.
Direction is not in itself an angle, but it is often measured in terms of its angular distance from a referenced direction.
• Distance—the spatial separation between two points, measured by the length of a line joining them.
On a plane surface, this is a simple problem.
However, consider distance on a sphere, where the separation between points may be expressed as a variety of curves.
It is essential that the navigator decide exactly how the distance is to be measured.
The length of the line can be expressed in various units (e.g., nautical miles (NM) or yards).
• Altitude—the height of an aircraft above a reference plane.
Altitude can be measured as absolute or pressure.
Absolute altitude is measured by a radar altimeter, and pressure altitude is measured from various datum planes.
Compare with elevation, which is the height of a point or feature on the earth above a reference plane.
• Time—defined in many ways, but definitions used in navigation consist mainly of: l. Hour of the day.
2.
Elapsed interval.
• Methods of expression—the methods of expressing position, direction, distance, altitude, and time are covered fully in appropriate chapters.
These terms, and others similar to them, represent definite quantities or conditions that may be measured in several different ways.
For example, the position of an aircraft may be expressed in coordinates, such as a certain latitude and longitude.
The position may also be expressed as 10 miles south of a certain city.
The study of navigation demands the navigator learn how to measure quantities, such as those just defined and how to apply the units by which they are expressed.
The Earth Shape and Size For most navigational purposes, the earth is assumed to be a perfect sphere, although in reality it is not.
Inspection of the earth’s crust reveals there is a height variation of approximately 12 miles from the top of the tallest mountain to the bottom of the deepest point in the ocean.
A more significant deviation from round is caused by a combination of the earth’s rotation and its structural flexibility.
When taking the ellipsoidal shape of the planet into account, mountains seem rather insignificant.
The peaks of the Andes are much farther from the center of the earth than Mount Everest.
Measured at the equator, the earth is approximately 6,378,137 meters in diameter, while the polar diameter is approximately 6,356,752.3142 met 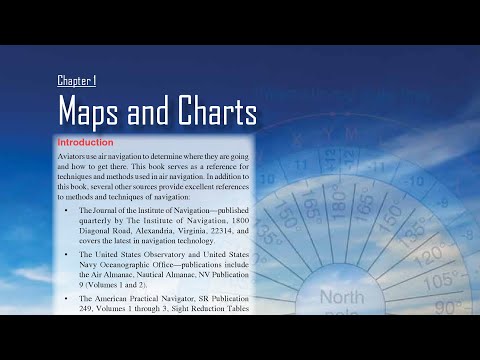