00:14:56 - Naval engagements where being old turned out to be an advantage?

00:32:52 - What benefits to civilian life do we enjoy thanks to naval technology?

00:41:40 - Steam locomotives have cylinder drain cocks to allow any condensated water out of the cylinders when starting. How was it generally handled on ships and how did it change between reciprocating engines and turbines?

00:46:35 - How valuable was ultimate top speed vs cruising speed/range?

00:52:17 - Would the Jeune École have been a viable option for either the U.S. navy or the navy of the confederacy during the American Civil War?

00:56:36 - What if HMS Erebus and HMS Terror had chosen to risk the unknown passage east around King William Island?

01:00:19 - Any examples of an enlisted man figuring significantly in a navy's history, excluding being known or important just for his valorous actions in combat?

01:02:38 - Was just it a coincidence that HMS Berwick came off worse in both of her cruiser engagements, or would any of the other Counties have done better?

01:04:46 - Had Tone NO. 4 launched on time how likely is it to have missed the US Carriers due to their different positions earlier in the day?

01:23:22 - Why did the RN abandon transom sterns for the Nelsons, and especially the KGVs?

01:26:53 - How would damage control aboard differ aboard a starship vs an ocean ship? How would it be similar?

01:31:05 - Was jamming actually used at Jutland? Would not the presence of enemy jamming be something of a 'trouble over here' sign as surely as hearing gunfire when it comes to indicators of hostilities elsewhere in the fleet?

01:34:43 - Would World War Two naval aviators have benefited from having an angled flight deck to land on?

01:41:36 - What kind of added difficulties would the Grand Fleet and the Harwich Force commanders have had if the codes of the Kaiserliche Marine had not been captured so early in the war?

01:46:49 - When the US Navy was bombarding the Japanese held islands, did they use only HE shells or did they also employ AP shells to penetrate the bunkers and tunnel systems?

02:00:50 - Why were there such recurrent problems in making a turret for anything more than two guns?

02:08:33 - Was it common for the Royal navy to invest in ports and just later abandon them? In what other cases has this occurred?

02:11:34 - Rear Admiral Sir Home Riggs Popham appears to have truly been "a damned cunning fellow" with a colorful career, and many significant contributions to the Royal Navy and the British Empire. Was or is he a particularly notable officer of the Royal Navy, or did the Royal Navy produce many with similar accomplishments during their careers in the Age of Sail?

02:17:39 - Why did it take so long for ship to ship missiles to become effective weapons?

02:22:02 - Did the Japanese have any real equivalent to the Condor in the Pacific Theater, and how effective was it? Conversely, what were the most effective Allied counters to it?

02:24:55 - Can you please explain whyconverting Leonardo da Vinci and the Italia class ironclad into aircraft carriers is a terrible idea?

02:28:50 - What would be commonly accepted values for acceptable dispersion? How much is too much, and how much is too little, and why those values?

02:40:40 - How useful were the active pre-standard U.S. battleships (Arkansas, New York, and Texas) in WWII and how does that utility compare to the QE and R-class battleships of the Royal Navy?

02:44:55 - What would a Washington Naval Treaty look like if the British had lost their fleet in WW1 (and the High Seas fleet also sank, so they can't use the German Ships) and would that give the RN a leg up in WW2 by having the most modern fleet?

03:00:03 - How did SMS Derflinger get the name Iron Dog and is it the best warship nickname of all time? 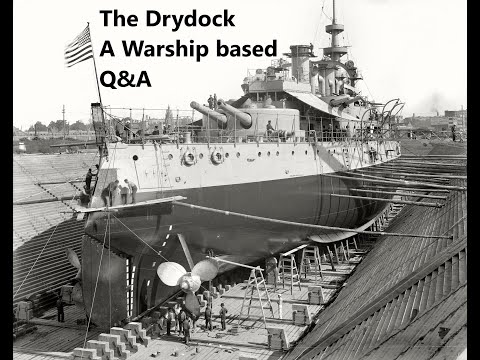