"How to Lead" with David Rubenstein and Adam Grant

Added 1 week ago by vindheim
4 Views
Join us for a conversation with The Carlyle Group co-chairman and philanthropist David M. Rubenstein as we explore the hallmarks of good leadership from our best political leaders, CEOs, founders and other giants, including the understanding of good - and bad - leadership in the U.S. Presidency and the political arena. We are incredibly fortunate to have Adam Grant, best-selling author, speaker, professor at Wharton, as our moderator for this conversation.

For the past five years, David M. Rubenstein—author of The American Story, visionary cofounder of The Carlyle Group, and host of The David Rubenstein Show—has spoken with the world’s highest performing leaders about who they are and how they became successful. How to Lead distills these revealing conversations into an indispensable leadership guidebook. The essential leadership playbook. Learn the principles and guiding philosophies of Bill Gates, Jeff Bezos, Ruth Bader Ginsburg, Warren Buffett, Oprah Winfrey, and many others through illuminating conversations about their remarkable lives and careers.

David M. Rubenstein is a Co-Founder and Co-Chairman of The Carlyle Group, one of the world’s largest private investment firms. He is a 1970 graduate of Duke University and a 1973 graduate of the University of Chicago Law School. He served as Chief Counsel to the U.S. Senate Judiciary Committee’s Subcommittee on Constitutional Amendments before becoming the Deputy Assistant to the President for Domestic Policy during the Carter Administration. He also practiced law in both New York City and Washington, D.C.

Adam Grant is an organizational psychologist at Wharton, where he has been the top-rated professor for seven straight years. He is one of TED's most popular speakers, his books have sold millions of copies, his talks have been viewed more than 25 million times, and his podcast WorkLife with Adam Grant has topped the charts. His best-selling books include Originals, Give and Take, and Think Again.

To RSVP for upcoming events, visit our events page at: thecommongoodus.org

"How to Lead" with David Rubenstein and Adam Grant 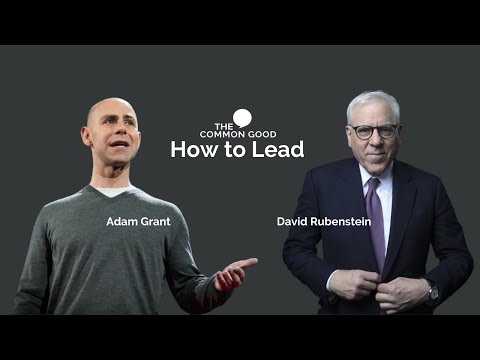 Join us for a conversation with The Carlyle Group co-chairman and philanthropist David M. Rubenstein as we explore the hallmarks of good leadership fr...