Added 1 week ago by vindheim
6 Views
For my full course helping you to pass the Canadian Citizenship Test first time check out:
https://courses.tom-bradford.com/p/canadian-citizenship-test

Aboriginal Peoples
When Europeans explored Canada they found all regions occupied by native peoples they called Indians, because the first explorers thought they had reached the East Indies. The native people lived off the land, some by hunting and gathering, others by raising crops. The Huron-Wendat of the Great Lakes region, like the Iroquois, were farmers and hunters. The Cree and Dene of the Northwest were hunter-gatherers. The Sioux were nomadic, following the bison (buffalo) herd. The Inuit lived off Arctic wildlife. West Coast natives preserved fish by drying and smoking. Warfare was common among Aboriginal groups as they competed for land, resources and prestige.

The arrival of European traders, missionaries, soldiers and colonists changed the native way of life forever. Large numbers of Aboriginals died of European diseases to which they lacked immunity. However, Aboriginals and Europeans formed strong economic, religious and military bonds in the first 200 years of coexistence which laid the foundations of Canada.

The First Europeans
The Vikings from Iceland who colonized Greenland 1,000 years ago also reached Labrador and the island of Newfoundland. The remains of their settlement, l’Anse aux Meadows, are a World Heritage site.

European exploration began in earnest in 1497 with the expedition of John Cabot, who was the first to draw a map of Canada’s East Coast.

Exploring A River, Naming Canada
Between 1534 and 1542, Jacques Cartier made three voyages across the Atlantic, claiming the land for King Francis I of France. Cartier heard two captured guides speak the Iroquoian word kanata, meaning “village.” By the 1550s, the name of Canada began appearing on maps.


Royal New France
In 1604, the first European settlement north of Florida was established by French explorers Pierre de Monts and Samuel de Champlain, first on St. Croix Island (in present-day Maine), then at Port-Royal, in Acadia (present-day Nova Scotia). In 1608 Champlain built a fortress at what is now Québec City. The colonists struggled against a harsh climate. Champlain allied the colony with the Algonquin, Montagnais and Huron, historic enemies of the Iroquois, a confederation of five (later six) First Nations who battled with the French settlements for a century. The French and the Iroquois made peace in 1701.

The French and Aboriginal people collaborated in the vast fur-trade economy, driven by the demand for beaver pelts in Europe. Outstanding leaders like Jean Talon, Bishop Laval, and Count Frontenac built a French Empire in North America that reached from Hudson Bay to the Gulf of Mexico.

Struggle For A Continent
In 1670, King Charles II of England granted the Hudson’s Bay Company exclusive trading rights over the watershed draining into Hudson Bay. For the next 100 years the Company competed with Montreal-based traders. The skilled and courageous men who travelled by canoe were called voyageurs and coureurs des bois, and formed strong alliances with First Nations.

English colonies along the Atlantic seaboard, dating from the early 1600s, eventually became richer and more populous than New France. In the 1700s France and Great Britain battled for control of North America. In 1759, the British defeated the French in the Battle of the Plains of Abraham at Québec City — marking the end of France’s empire in America. The commanders of both armies, Brigadier James Wolfe and the Marquis de Montcalm, were killed leading their troops in battle.

The Province Of Quebec
Following the war, Great Britain renamed the colony the “Province of Quebec.” The French- speaking Catholic people, known as habitants or Canadiens, strove to preserve their way of life in the English-speaking, Protestant-ruled British Empire.

A Tradition Of Accommodation
To better govern the French Roman Catholic majority, the British Parliament passed the Quebec Act of 1774. One of the constitutional foundations of Canada, the Quebec Act accommodated the principles of British institutions to the reality of the province. It allowed religious freedom for Catholics and permitted them to hold public office, a practice not then allowed in Britain. The Quebec Act restored French civil law while maintaining British criminal law.

United Empire Loyalists
In 1776, the 13 British colonies to the south of Quebec declared independence and formed the United States. North America was again divided by war. More than 40,000 people loyal to the Crown, called “Loyalists,” fled the oppression of the American Revolution to settle in Nova Scotia and Quebec. Joseph Brant led thousands of Loyalist Mohawk Indians into Canada.

For my full course helping you to pass the Canadian Citizenship Test first time check out:
https://courses.tom-bradford.com/p/canadian-citizenship-test 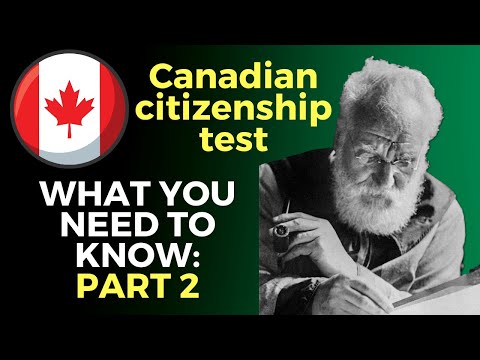 For my full course helping you to pass the Canadian Citizenship Test first time check out: https://courses.tom-bradford.com/p/canadian-citizenship-tes...