Added 2 weeks ago by
6 Views
Defense and aerospace group Saab on Friday announced that it received a further order from the Swedish Defence Material Administration (FMV) to continue the development and production, as well as expand the capabilities, of the two A26 Blekinge class submarines previously ordered by Sweden.

“Saab is currently constructing the world’s most advanced conventional submarine. The new capabilities that are to be added to the A26 will give an additional edge within the weapon system and stealth technology among other things. With support from Saab’s skilled employees and investments, the important industrial submarine capability in Sweden has been restored,” says Micael Johansson, Saab’s President and CEO.
The first steel cut has been made for the new U.S. Navy aircraft carrier Doris Miller (CVN 81) at Huntington Ingalls Industries’ Ingalls Shipbuilding division, Aug. 25.

During a small ceremony held inside of a manufacturing facility, Thomas Bledsoe, the great nephew of the ship’s namesake, gave the order to “cut that steel” to shipbuilder Gerald Bish, who operated a large plasma-cutting machine that sliced into a steel plate. Shipbuilders, U.S. Navy leadership, elected officials and Doris Miller’s relatives signed their names on the plate.

“Today we recognize the start of construction of the fourth ship of the Gerald R. Ford class,” said Jennifer Boykin, president of Newport News Shipbuilding. “From this day forward, our shipbuilders will put their hearts into every pipe they fit, every unit they lift and every inch of steel they weld.
L3Harris Technologies said it has flown for the first time a new U.S. Army technology demonstrator aircraft that will be capable of conducting both reconnaissance and electronic warfare, according to an Aug. 27 announcement.

The Army’s Airborne Reconnaissance and Electronic Warfare System, or ARES, aircraft will help the service modernize its airborne intelligence, surveillance and reconnaissance capabilities and will feed into the High Accuracy Detection and Exploitation System program, which could produce an aircraft to replace the Army’s aging Guardrail ISR aircraft fleet with greater capability and increased standoff ranges.
Guardrail, a turboprop aircraft based on the King Air, is becoming obsolete in both operational capability and maintenance. The Army has reached a point where it is pulling parts from the boneyard to keep the aircraft operational
The stealth destroyer left the Bath shipyard and headed down Maine’s Kennebec River yesterday, 27 August to begin sea trials. Lyndon B. Johnson (DDG 1002) was launched in December 2018 and christened in April 2019. It is expected to be commissioned with the U.S. Navy in 2023. First ship-in-class USS Zumwalt was commissioned in October 2016 while sister ship USS Michael Monsoor was commissioned in January 2019.
The third ship in the Zumwalt-class, DDG 1002 is named in honor of late President Lyndon B. Johnson, who served in office from 1963-1969, and will be the first ship to bear his name.

The multi-mission Zumwalt-class destroyers will be capable of performing a range of deterrence, power projection, sea control, and command and control missions while allowing the Navy to evolve with new systems and missions. Zumwalt ships are 610 feet long, have a beam of 80.7 feet, displace almost 16,000 tons, and are capable of making 30 knots speed. 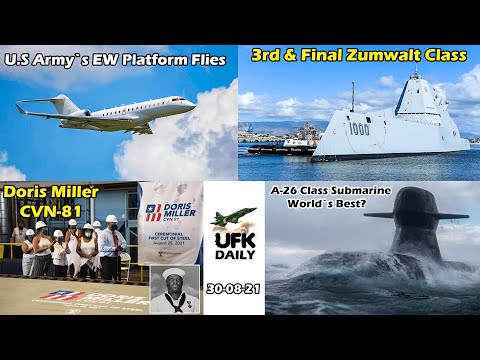 Defense and aerospace group Saab on Friday announced that it received a further order from the Swedish Defence Material Administration (FMV) to contin...